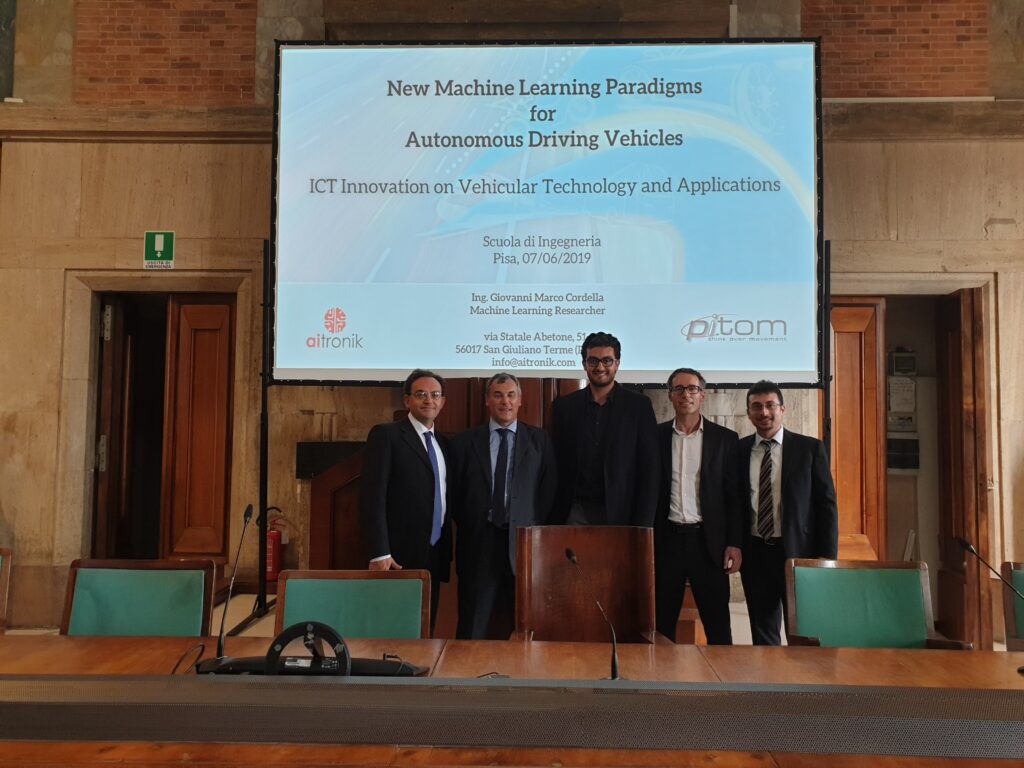 On Friday, June 7, a workshop entitled “ICT Innovation on Vehicular Technology and Applications” was held at the School of Engineering of the University of Pisa. Aitronik was invited to give a talk entitled “New Machine Learning Paradigms for Autonomous Driving Vehicles“.

During the event, Giovanni Marco Cordella -a Machine Learning Researcher at Aitronik- provided a review of current Machine Learning techniques for Autonomous Vehicles, with insights into their use in Aitronik use cases.

Some of them involved robots that should adapt to scenario modifications or completely new environments. As an example, let’s take the scenario in the video below.

In the case where a robotic vehicle has to autonomously navigate in the construction area, the surrounding map dynamically changes over time.

Giovanni Marco highlighted how, in such an environment where no map can be statically stored on the robot’s memory, the robot has no a-priori knowledge of the environment.

Giovanni Marco explained how the neural networks -the equivalent of the human brain, but with neurons coded into a computer- can be trained offline. Letting the robot learn on a simulator saves a huge amount of training time, and is much safer than directly training the neural networks on the real vehicle. Training on a simulated scenario is shown in the video above.

A meaningful example was shown by Giovanni Marco, and it is represented in the video below.

The ATR Orbiter robot, produced by ATR Robotics and robotized by Aitronik on the Comp4Drones EU-funded project, has no stored map of the environment and is programmed to find and reach a specific person while avoiding obstacles. Measurements coming from sensors, i.e. a laser scanner and a daylight camera, are directly fed into the neural network, with no pre-filtering or computation. Like a magic box, the neural network outputs the commands for the actuation system.

Giovanni Marco showed how, in case no further training is done on the real vehicle, something may go wrong with parameters obtained in simulation.